The stock market is currently on the roughest losing streak since the start of the pandemic in 2020. The broad S&P 500 index is down 19% from its all-time high, putting it within a whisker of bear market territory. But the tech-centric Nasdaq-100 index is already there, with a loss of 28.3% since November 2021.

While the investment picture might be nerve-wracking for many investors, history suggests down markets always eventually recover, so this might actually be a great time to put some money to work. Here’s one fast-growing stock leveraging advanced technology, and it’s worth considering because it’s trading at an 88.9% discount to its all-time high, despite the company being highly profitable. 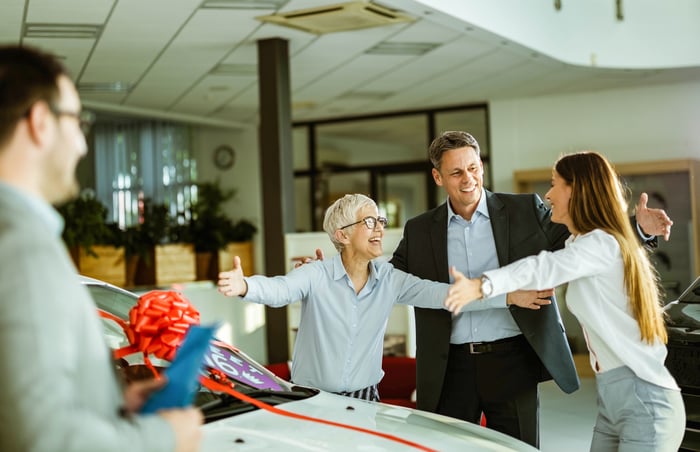 Upstart is transforming the lending business

But Upstart Holdings (UPST -13.34%) says those metrics don’t provide the full picture of a person’s ability to repay a loan. The company has built an artificial intelligence algorithm that measures 1,600 data points, including where a potential borrower currently works and his or her education, to generate a more accurate credit score. The algorithm also arrives at a decision instantly 74% of the time, which can save days or weeks of an employee manually generating a credit assessment.

That’s a big win for banks, one of which has ditched FICO scores altogether in favor of this new-age technology. That raises an important point: Upstart’s goal isn’t to write loans itself but rather originate them for its bank partners in exchange for a fee. Typically, this means Upstart holds little to no credit risk, although it recently deviated from this strategy temporarily, which is one reason its stock has fallen so steeply.

The company has been conducting research and development for its new automotive lending segment, and it had used $252 million of its own cash by the end of 2021 to make loans to borrowers. By the end of the first quarter of 2022, that figure soared to $597 million as the company struggled to sell the loans to its partners amid difficult credit conditions.

Upstart’s management says it expects this situation will be temporary, and since Upstart originations topped $4.5 billion in the quarter, the $345 million in additional credit risk it absorbed in Q1 represents just 7% of all the loans its algorithm originated.

The key to originating the maximum volume of automotive loans is to meet potential borrowers where they make their purchases — inside car dealerships. To accelerate its progress, Upstart acquired car dealer sales software company Prodigy. It has integrated its algorithm into that platform to create what is now called Upstart Auto Retail, a two-in-one sales and lending software that has been adopted by 525 dealerships servicing 35 different auto manufacturers. That’s a whopping 224% jump compared to just a year ago.

But it gets better for Upstart

Upstart has hinted that its eye could be on even larger segments of the lending market. In its presentation for the recent quarter, it highlighted the $644 billion small business lending market and the $4.5 trillion mortgage market. The company hasn’t explicitly outlined plans to enter these businesses, but by mentioning them, it offers some insight into where Upstart might turn for its next phase of growth.

Unfortunately, a predicted slowdown in economic growth caused Upstart to rein in its revenue guidance for 2022. Management expected to generate $1.4 billion, but that was revised down to $1.25 billion; still, it represents a 47% jump compared to the 2021 result of $849 million.

The company is also very profitable, with $2.72 in adjusted earnings per share on a trailing-12-month basis. That places Upstart stock at a price-to-earnings multiple of 18.9, a 27% discount to the Nasdaq-100 index, which trades at a multiple of 26.

Upstart’s stock price might be down 88.9% from its all-time high of $401, but it has rocketed higher by 77% from its 52-week low point, which was set after its earnings release just two weeks ago. Clearly, some investors still see value in the company, and it’s arguably still very cheap.

What's the Best Way to Invest in My Early 20s? an Expert Gives 5 Steps

An Outline of Top Selling Things on Etsy
19 hours ago