Warren Buffett is widely regarded as one of the greatest investors in history. The Oracle of Omaha’s career has spanned more than 70 years; even at age 91, his strategy continues to drive Berkshire Hathaway (BRK.A -2.26%) to outperform the market. But such a long investing career is bound to come with a few missed opportunities. One in particular stands above the rest, because the protagonist in that story is now wealthier than Buffett himself. Of course, I’m referring to Jeff Bezos of Amazon (AMZN -7.16%).

While Buffett did ultimately come around to invest in Amazon, he admits to having underestimated the potential of the company and its leadership. Since its IPO, Amazon stock has reaped returns of 115,000%. In delaying its investment in Amazon, Berkshire has still seen notable returns on its initial investment but missed out on many early years of growth. So why did the famed investment firm wait so long to develop a position in the company?

Moreover, what should retail investors make of Berkshire’s relationship with Amazon? Today, Amazon is a diverse business with stakes across industries like e-commerce, cloud services, advertising, and even electric vehicles. The company also attracted heightened attention earlier this year when it announced a 20-for-1 stock split. Let’s take a look at why Berkshire hesitated on Amazon stock, and how today’s investors should interpret that information moving forward. Slow and steady wins the race

If there’s one word you could use to describe Warren Buffett’s track record, it’s “consistent.” Rather than treat the market as a place to make quick money off of lucky picks, Buffett strives to buy shares in real, growing businesses for the long term. That’s the recipe behind Berkshire Hathaway’s average annualized returns of 20%, which is double that of the S&P 500.

Buffett has espoused many investing rules over the decades, but his hesitancy on Amazon appears to stem from some of his more famous guiding principles. First, Buffett rarely buys into businesses he doesn’t understand, and tech-driven online retail probably fit that mold over 20 years ago. He also prefers to invest in wonderful businesses at fair prices, rather than fair businesses at wonderful prices. In that vein, Buffett has said that Amazon seemed expensively valued at the points when he considered jumping in but did not. Sometimes, though, these rules result in missed opportunities or being late to the party.

But being late to the party doesn’t always exclude impressive returns. Berkshire famously bought a 5% stake in Apple (AAPL -5.64%) in 2018, a whole 42 years after that company was founded. Onlookers might have considered the move risky at the time, as Apple already had massive growth in its rear-view mirror. Yet Buffett’s initial $36 billion holding has rocketed in value to a whopping $133 billion today — not a bad result.

In the case of Amazon, Berkshire was again merely late to the party. The conglomerate did make a $1 billion bet on Amazon in 2019 — however, Buffett wasn’t the one who initiated the purchase.

A leader across industries 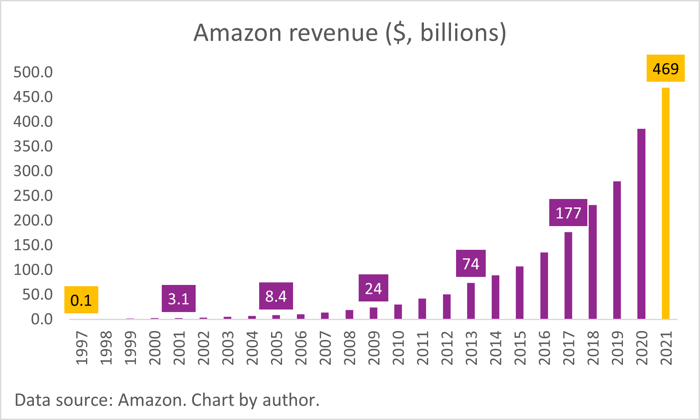 Just as was the case in Amazon’s early days, e-commerce is still the dominant driver of the company’s revenue, but that segment certainly isn’t the mainspring of the company’s growth. That award goes to Amazon Web Services (AWS), the company’s industry-leading cloud services segment. The cloud is a revolutionary technology that helps businesses migrate their digital operations online, allowing teams to work collaboratively no matter their location. More recently, cloud providers like AWS have begun offering advanced tools like artificial intelligence and machine learning to help their clients supercharge their operations. AWS grew revenue by 37% to $62 billion in 2021, and it accounted for 74% of Amazon’s operating income.

Amazon is expanding beyond its cloud platform. In Q4 2021, Amazon revealed stand-alone revenue figures for its advertising business, which generated a whopping $31 billion for the full year. This momentum continued into the first quarter of 2022 with a further $7.8 billion in sales. Amazon’s budding entertainment wing could attract even more ad dollars going forward: Amazon Prime holds exclusive rights to air the NFL’s Thursday Night Football, and platforms like Amazon Music continue to gain ground

The company also owns a large stake in electric vehicle maker Rivian Automotive (RIVN -0.73%). While that has been an incredibly volatile investment, it opens the door for Amazon to profit from the growth of a potentially multi-trillion-dollar industry in the coming decades.

Buy the business, not the stock split

Stock splits have been all the rage in 2022 among some of the world’s largest companies. Tesla, Alphabet, and Shopify have all elected to split their shares this year, and Amazon has plans to do the same on June 3. While stock splits garner lots of media attention as they make shares more attractive to individual and retail investors, the move adds no real value to the underlying business and is instead a purely cosmetic change. Amazon stock currently trades at around $2,200, but after the split, shares will cost just around $110. The goal of a stock split is to make Amazon more attractive for smaller investors who might hesitate to spend over $2,000 on a single share or who may be unwilling or unable to buy shares fractionally.

As a result of attracting more individual investors, the split could result in more money flowing into the stock, which could in turn boost its price. This isn’t a sure thing, and it’s not a reason to buy into Amazon on its own. But for investors considering opening a position in the company or adding to an existing one, the aforementioned reasons are probably sufficient.

Warren Buffett missed out on the first 20 years of Amazon’s success, but you don’t have to miss the next 20.

An entrepreneur from the Berdyuzhsky district opened a greenhouse for growing vegetables, seedlings, and herbs