It’s been a turbulent time for the stock market lately, and Wednesday brought huge losses for investors. Rising evidence that inflationary pressures are eating into corporate profits could signal continued price increases even if the economy slows, creating a devastating environment of stagflation. Markets were down across the board, and the Nasdaq Composite (^IXIC 0.00%) finished with losses of nearly 5% on the day.

Things got worse after the market closed, as Cisco Systems (CSCO -4.43%) added to the downbeat mood with financial results that raised new concerns. However, another tech stock in the Nasdaq managed to produce at least a modest bounce after the market closed. We’ll reveal the name of that stock after taking a closer look at Cisco. 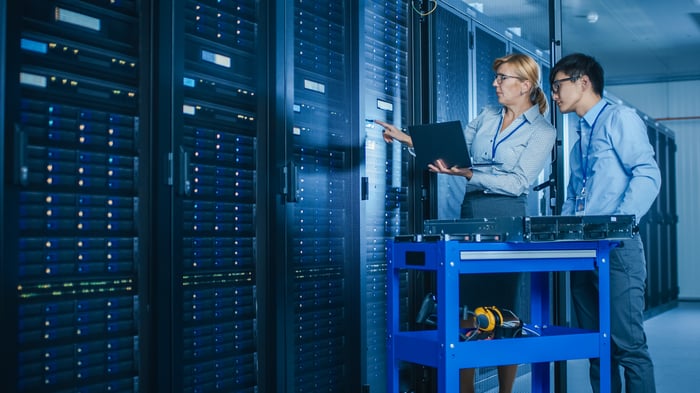 Shares of Cisco Systems were already down more than 4% in the regular session on Wednesday. They went on to drop another 12.5% after hours as of 6 p.m. ET, as investors reacted negatively to the tech company’s results for the fiscal third quarter, which ended April 30.

Cisco’s numbers weren’t able to show investors much evidence of growth. Revenue of $12.8 billion was flat from last year’s sales. Strength in the Americas was offset by weakness in greater Europe and the Asia-Pacific region. The networking giant did make some minimal progress on the net income front, but adjusted earnings of $0.87 per share were up just 5% year over year.

CEO Chuck Robbins said that demand for Cisco technology remained strong. Also, its efforts to transform the business remained on track. But the company cited new lockdowns in China pursuant to the nation’s zero-COVID policy as weighing on performance, along with the war in Ukraine and related economic disruptions.

However, Cisco’s guidance for the fiscal fourth quarter was notably weak. Revenue is expected to fall 1% to 5.5% from year-earlier levels, while adjusted earnings will likely come in between $0.76 and $0.84 per share. Poor sequential performance points to uncertainty about the near future, and investors aren’t pleased to deal with an outlook that poor from a company that used to be the largest in the world.

On the other hand, shares of Synopsys (SNPS -3.62%) managed to perform better. Although the tech stock was down in the regular session, it bounced back after reporting its latest results, posting a 4% gain in after-hours trading.

Synopsys’ results for the fiscal second quarter, ending April 30, looked solid. Revenue of $1.279 billion was up about 25% year over year. Adjusted net income came in with an even bigger rise of 46% from year-ago levels, and the $391 million in adjusted profit worked out to earnings of $2.50 per share compared to $1.70 in the second quarter of fiscal 2021.

Synopsys does most of its business in semiconductor and system design, and that side of the business was particularly impressive, outgrowing the overall company on both the top and bottom lines. But that’s not to say that its software integrity business was a poor performer, as it enjoyed 55% segment operating-income growth.

Investors were pleased that Synopsys sees revenue for the full 2022 fiscal year rising to between $5 billion and $5.05 billion, with adjusted earnings of $8.63 to $8.70 per share. That doesn’t make the stock look exactly cheap, but it has held up better than many Nasdaq tech stocks and looks poised to hold its own even in a tough year.

Top picks to buy the dip in an undervalued market