Amazon (NASDAQ: AMZN) shareholders voted on nearly 20 proposals during its annual meeting this week. One of these proposals has garnered loads of attention ever since Amazon announced it a couple of months ago. I’m talking about the idea for a 20-for-1 stock split.

During the meeting, the retail giant’s shareholders approved the split. That means, as of June 6, Amazon shares will begin trading on a split-adjusted basis. Meanwhile, this once-superstar stock has turned into a struggling one. It’s dropped more than 30% so far this year. Could the split give it a boost? Let’s find out. 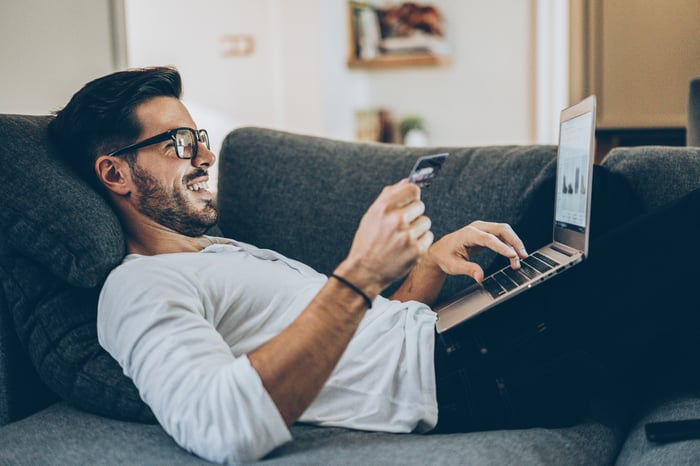 First, a little background on Amazon’s long-term share performance and where the split fits in. Amazon’s shares have soared over time thanks to its general financial performance. The company has increased both annual revenue and profit over the past five years. It’s been bringing in billions of dollars through its two main businesses: e-commerce and cloud computing. 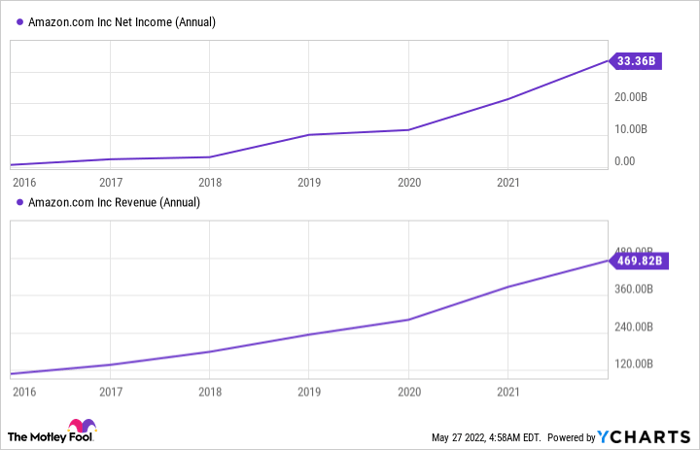 Amazon’s free cash flow, return on invested capital, and share price all gradually increased from 2016 through last year. (As you’ll see from the chart, all of that changed this year — more on that in a minute.) 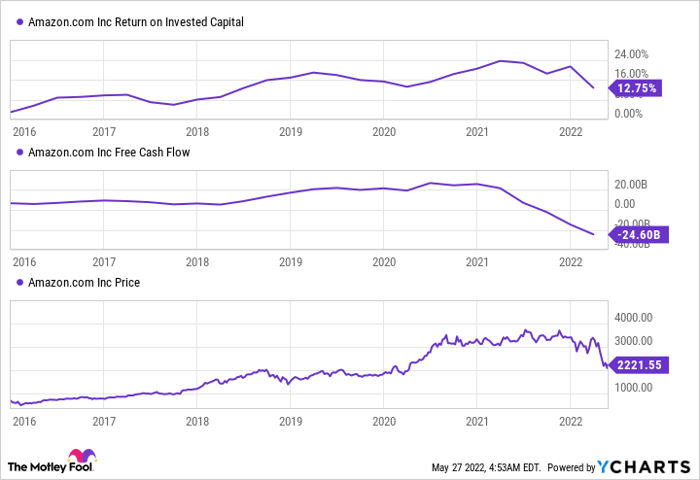 The only “problem” with Amazon’s great performance has been the high price of each individual share — at the stock’s peak it topped $3,600. And even after this year’s declines, it’s still trading above $2,100. Shares at this price make it more difficult for investors to take a small stake in the company. There is the option of purchasing fractional shares — but they aren’t available through all brokerage firms. And some investors prefer buying at least one full share.

Stock splits don’t change the overall market value of a company. They just allow that company to issue more shares — and therefore reduce the value of each individual one. Considering Amazon’s price today, the shares should trade at about $109 eac once the split happens. This will make it easier for a broader range of investors to scoop up shares of Amazon.

Before talking about whether the stock split should lift Amazon’s shares, let’s take a look at Amazon’s financial performance this year. The company broke from its usual pattern of growth. Instead, in the first quarter, free cash flow shifted to an outflow of more than $18 billion for the trailing 12 months. Operating income decreased in the quarter. And the company reported a net loss of $3.8 billion.

The reason? Amazon’s facing the same headwinds as other retailers: inflationary pressures and supply chain problems. The good news is Amazon says it should be able to control about two-thirds of its higher incremental costs. And the other bit of good news is the fact that many of the challenges the company faces today are external and temporary. So, I’m optimistic the e-commerce and cloud computing businesses can drive more growth over time.

Now, let’s talk about the stock split. Can it boost the shares? In the near term, it’s possible. As mentioned above, a lower stock price makes it easier for a wider range of investors to give Amazon a try. It also makes it easier for current shareholders to add on a few shares. But it isn’t the actual reason to invest in Amazon. So, the stock split won’t drive lasting, long-term share performance.

Instead, other elements could do that. Amazon Web Services — the cloud computing business — still is growing in the double digits. That, along with Amazon’s progress in cutting costs and potentially returning its overall business to profitability, may be a big catalyst. And these elements could lead to more impressive gains for Amazon shares over time.

10 stocks we like better than Amazon
When our award-winning analyst team has a stock tip, it can pay to listen. After all, the newsletter they have run for over a decade, Motley Fool Stock Advisor, has tripled the market.*

They just revealed what they believe are the ten best stocks for investors to buy right now… and Amazon wasn’t one of them! That’s right — they think these 10 stocks are even better buys.

When do you need life insurance? - Agweek

How to use Facebook Messenger for your business
2 days ago