European Union leaders agreed to pursue a partial ban on Russian oil, paving the way for a sixth package of sanctions to punish Russia and its president, Vladimir Putin, for the invasion of Ukraine.

The sanctions would forbid the purchase of crude oil and petroleum products from Russia delivered to member states by sea but include a temporary exemption for pipeline crude, European Council President Charles Michel said late Monday during a summit in Brussels.

“This immediately covers more than 2/3 of oil imports from Russia, cutting a huge source of financing for its war machine,” Michel said in a tweet. “Maximum pressure on Russia to end the war.”

Insurance (or Lack of It) Is Russian Oil’s Achilles’ Heel

Officials and diplomats still have to agree on the technical details and the sanctions must be formally adopted by all 27 nations, and Michel said ambassadors would meet Wednesday.

Hungary, which will continue to receive Russian oil via pipeline, had been blocking an embargo for the past month as it sought assurances its energy supplies wouldn’t be disrupted. Budapest received guarantees from EU leaders that it would be able to receive replacement supplies if the pipelines were disrupted, according to two people familiar with the talks. 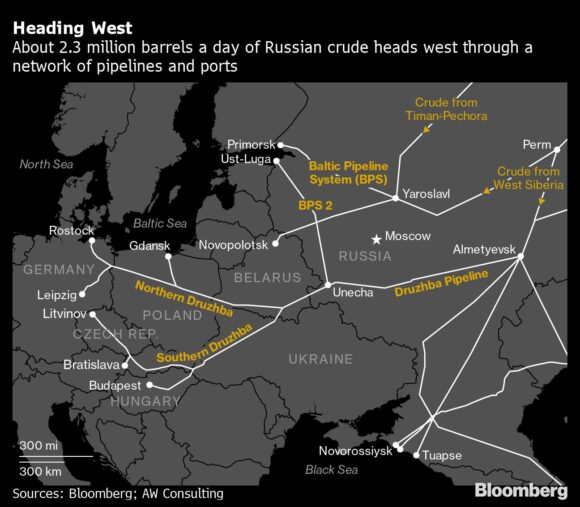 The European Commission has proposed to ban seaborne crude oil six months from adoption, while refined petroleum products would be halted in eight months, according to people familiar with the most recent version of the proposal. Shipments of oil through the giant Druzhba pipeline to central Europe will be spared until a technical solution is found that satisfies the energy needs of Hungary and other landlocked nations.

Oil headed for the longest run of monthly gains in more than a decade following the news. Brent crude topped $123 a barrel, a two-month high.

The bulk of the current pipeline deliveries are to Germany and Poland, which have signaled they will wean themselves off Russian supplies regardless of any EU action. Berlin committed in writing to stick to that pledge on Monday, one of the people said. If both countries follow through, the total effect, along with seaborne embargo, would be to cut 90% of Russian crude oil sales to the EU by year’s end.

“We should be able to soon return to the issue of the remaining 10% of pipeline oil,” European Commission President Ursula von der Leyen said at a news conference early on Tuesday.

Seaborne supplies account for about two-thirds of Russian oil imports, and once in place, the measure would cost Putin up to $10 billion a year in lost export revenue, according to Bloomberg calculations. That’s because the ban would force Russia to sell its crude at a discount to Asia, where it’s already changing hands at about $34 a barrel cheaper than the price of Brent futures.

Hungarian Prime Minister Viktor Orban, who has accused the EU of forcing the decision on member states, told leaders behind closed doors that the discussion on restricting pipeline imports needs to happen at the level of EU leaders because it’s a political decision, not a technical matter, according to a person familiar with the meeting. The next summit of EU leaders is scheduled for late June.

The package also proposes a ban on insurance related to shipping oil to third countries, but it won’t take effect until six months after the adoption of the measures, from the previously proposed three-month transition, the people said. That adds to a longer list of concessions since the proposal was originally put forward by the EU’s executive arm in May.

The EU’s efforts to limit price spikes and Russia’s ability to divert its oil exports in the event of a European embargo had already been watered down in earlier negotiation rounds after a plan to ban tankers from transporting oil to third countries was abandoned.

A plan to ban Russians from purchasing real estate in the EU was dropped from the deal, according to a person familiar with the negotiations. Haggling over the terms of the EU’s oil embargo also led other member states to seek exemptions.

Some countries will also have a longer transition for the seaborne oil ban. For Bulgaria, a period until June or December 2024 is envisioned, while Croatia could get an exemption for imports of vacuum gas oil, which is used to make products including gasoline and butane.

Russia shipped about 720,000 barrels a day of crude to European refineries through its main pipeline to the region last year. That compares with seaborne volumes of 1.57 million barrels a day from its Baltic, Black Sea and Arctic ports.

Other measures in the proposed EU sanctions package include:

Top photograph: Drilling operations at a drill rig, operated by Rosneft PJSC, at the Samotlor oil field near Nizhnevartovsk, Russia, on March 21, 2017.Samotlorneftegaz is one of the largest extracting enterprises of Rosneft, which is developing the central and south-western part of the Samotlor oil and gas field, one of the largest fields in Russia. At the field there are about 8,300 production wells and more than 2,700 injection wells, with the latest high-tech equipment. Photo credit: Andrey Rudakov/Bloomberg

Monkeypox virus to get health insurance coverage? Find out