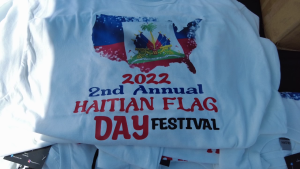 The event was complete with vendors, music, food, and resources for the community. Kids got a chance to learn about the culture, and make crafts while the adults got health screenings, and vaccinations, and made connections with other Haitian or black-owned businesses.

Gertha ‘Gigi’ Jean, Co-founder of the company says they’re committed to helping the growing Haitian population while also introducing Haitian culture to the community. “We wanted to be a bridge to connect everyone to the Haitian culture because there are so many resources out there but because of the language barrier, a lot of people don’t know about it,” says Jean. She adds, “We just want to go ahead and just let everybody know, and have an experience, I mean we have the best food! Just the community coming together just to celebrate the event is awesome.”

The official Haitian flag day is Wednesday, May 18th.

Stock futures rise ahead of a big week of retail earnings