Peloton Interactive‘s (PTON -1.49%) share price recently hit a 52-week low of $11.25 after trading as high as $171 over a year ago. It currently trades at around $14 a share. The stock started nosediving last year after the company struggled to maintain its fast pace of growth sparked, in part, by the coronavirus pandemic.

With the introduction of vaccines allowing people to return to work, gyms, and elsewhere, there was some reduction in the need for and the use of Peloton equipment and services. Also, with the economy reopening, it contributed to rising inflation. The higher prices for everyday goods are squeezing many consumers and potentially causing some prospective customers to wait before purchasing a pricey exercise machine. 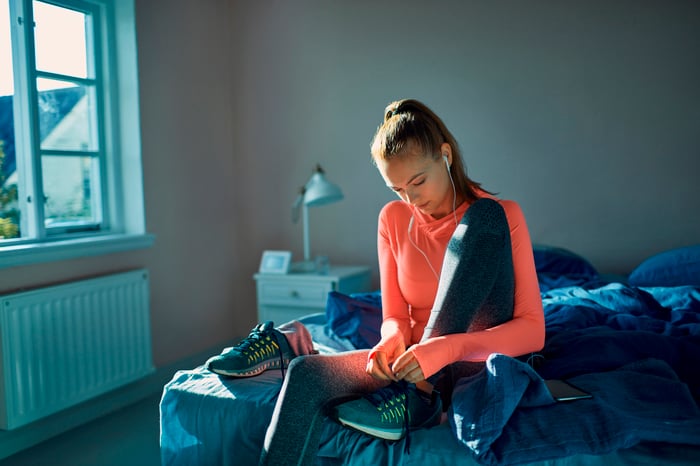 On the other side of the ledger, the growth opportunities in the virtual fitness market have been estimated as rising to $79 billion by 2026 (from $11.4 billion in 2021). If Peloton wants to take advantage of that projected growth, it has several issues to address and it needs to resolve them before I would consider buying the stock. Let me explain.

The most glaring issue facing Peloton is not the 24% year-over-year decline in revenue in the quarter ending March 31. While falling sales is bad, CEO Barry McCarthy’s top priority should be to stop the bleeding on the bottom line.

“I’ve been in the CEO role of Peloton since Feb. 9. During those three months I’ve focused on: 1. stabilizing the cash flow 2. getting the right people in the right roles, and 3. growing again,” McCarthy wrote in the fiscal third-quarter earnings report.

Those three priorities outlined by McCarthy don’t even begin to paint the whole picture of what needs to be done to get Peloton on solid footing. Peloton reported a massive net loss of $757 million last quarter, bringing the company’s cumulative loss to nearly $1.6 billion through the first three quarters of fiscal 2022.

Peloton could still earn a small profit despite the revenue decline due to its subscription-based business model. Subscription gross margin is more than twice the margin of exercise equipment. The main problem contributing to the losses on the bottom line is too many unsold Bikes and Treads piling up in inventory.

Peloton’s inventory increased to $1.4 billion as of March 31, up from $937 million on June 30, 2021. Inventory has risen much faster than sales, which explains why the company is losing so much money.

The good news is that this is a fixable issue. The bloated inventory will correct itself as more connected fitness products are eventually sold. This is why management expects the business to report positive free cash flow in fiscal 2023.

McCarthy has a plan to return the business to profitable growth. One of the near-term goals is to shift from aggressively expanding the customer base to focusing on maintaining the existing 2.9 million connected fitness subscribers.

The idea with this strategy is to increase the lifetime value of each member, and thus push Peloton’s margins up. Peloton incurs a higher cost when a subscriber initially signs up, but the longer they stick around the more profitable they are for the business. For example, Peloton spends a high amount upfront to set up studios and hire instructors, but one studio can stream classes endlessly to millions of paying members.

But there is still a mountain of problems Peloton needs to fix, including bringing costs down to match demand and finding the right strategy to grow product sales over the long term. As for the latter, management has been tinkering with product pricing lately, including testing a fitness-as-a-service subscription plan, where customers get the hardware free in exchange for paying a higher membership fee.

Wait for these signs before buying the stock

I wouldn’t buy the stock until Peloton shows improvement in the following:

The stock looks cheap and could soar in value if management turns the business around. But investors need to factor in execution risk here. After all, sometimes turnarounds don’t turn, or they end up taking much longer than originally expected.

If Peloton is successful with its turnaround, there will still be plenty of long-term upside for investors who buy at a higher share price. Keep Peloton on your watchlist for now.

Entrepreneurs, Here’s How To Overcome Rejection...Again