Upon first glance, Axsome Therapeutics (AXSM 10.10%) doesn’t exactly sound like a candidate for being a safe stock that’s ready to buy today. At present, the biotech has no approved drugs nor any revenue. Nor does it have much cash on hand or any major collaborator to keep it afloat.

So how could it possibly be safe? The short answer is that all of the above is likely to change for the better. And it all boils down to one subtle clue that was disclosed recently. 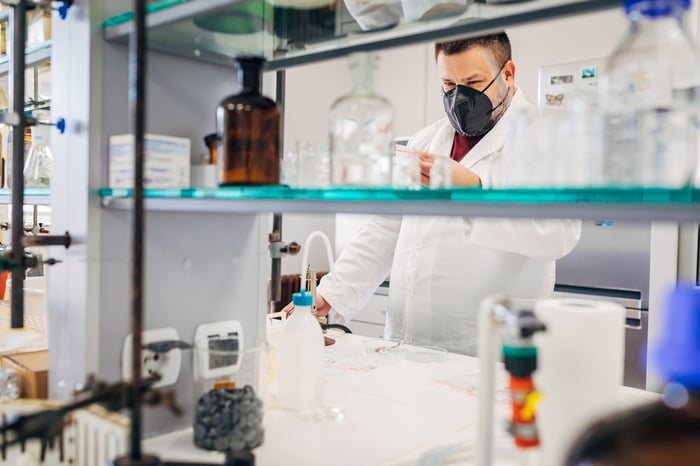 Axsome is developing a handful of medicines that are intended to treat neuropsychiatric illnesses like narcolepsy and migraines. Its drug AXS-05 is its flagship program, and it’s being investigated in a late-stage clinical trial for its usefulness in treating agitation in Alzheimer’s disease, as well as in another trial for smoking cessation.

Per an SEC filing on April 19, the company assented to a set of post-market requirements proposed by the U.S. Food and Drug Administration (FDA) pertaining to its drug AXS-05, which is intended to treat major depressive disorder (MDD). The fact that the FDA is asking for specific things to happen after the medicine’s debut on the market means that regulators are highly likely to be planning to approve the drug. It might also lead investors to wonder if Axsome is a safe stock, not to mention a growth stock with huge potential.

After all, with a regulatory approval (hopefully) nearly in the bag, much of the clinical development risk that characterizes typical pre-product biotech stocks is mitigated. In other words, if everything goes according to plan from here on out, investors can capture significant returns from the company’s commercialization of AXS-05, but without as much of a chance of everything falling through. And AXS-05 could be approved for sale as soon as sometime this quarter.

So goes the argument in favor of buying this stock right now. Of course, things are slightly more complicated than that.

What makes it less safe than it might seem

Despite the positive preliminary news regarding AXS-05, there remains a small chance that the company will struggle to meet the FDA’s requirements for approval, which has been a problem for it in the past. Most recently, the FDA rejected its drug AXS-07, intended to treat migraines, as a result of issues with the manufacturing data the company submitted. But, the issues with AXS-07 aren’t likely to be severe enough to be the end of the road for the project. At this point, it’s hard to imagine an obstacle on that front with the AXS-05 program that would totally destroy its share price, though a similar stumble would likely do a bit of damage.

Regardless of the approval’s status, one other issue with Axsome is that it doesn’t have much cash compared to its expenses, as shown below: 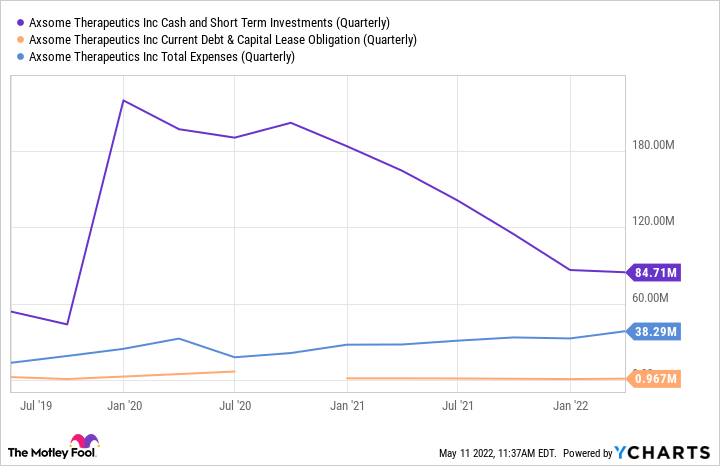 While its total debt load of $49.7 million is manageable, as is the amount of current debt due within a year, it looks like something will need to give for the company to pay its expenses this year. Even if the FDA gives AXS-05 its stamp of approval, actually commercializing the therapy to the point where it yields more money than it costs to produce might take a couple of quarters. But getting the approval could deliver a boost to its share price. And here’s what management did the last time share prices skyrocketed and cash was running low: 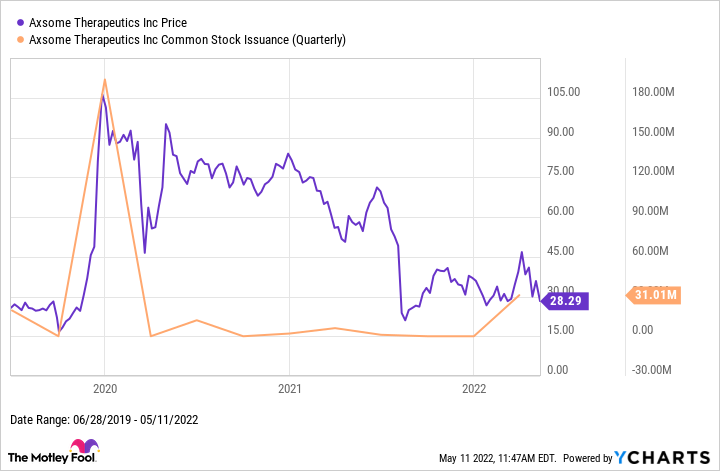 That’s right, it issued a boatload of new shares of stock, diluting the existing shareholders in the process. And the next time its shares spike in price, the risk of getting diluted is very high. Of course, for veteran biotech investors, that’s business as usual, and it’s nothing to be overly frightened of, but it should still be on the radar as a possibility.

For the record, management claims that the company has enough remaining capital from a $300 million term loan facility to keep things humming until 2024. Therefore, it makes sense to anticipate a rising debt load if leaders decline to issue new shares.

At the moment, Axsome looks a bit safer than most of the (very risky) biotech stocks out there, thanks to its likely approval for AXS-05 and its collection of late-stage pipeline projects. Though it might need to take out new debt or issue new stock to bridge the funding gap between now and when it starts to realize profits from sales of its medicine, assuming that it does, it’ll remain in good shape.

Still, the above doesn’t exactly make Axsome a desirable stock for conservative or risk-averse investors. Its marketing, manufacturing, and distribution abilities are still entirely unproven, as is its general ability to operate profitably. Likewise, at present, shareholders have little indication of what management plans to do with the anticipated windfalls from any newly commercialized drugs.

Therefore, even if it’s a safe biotech stock to buy, it probably isn’t a safe stock to buy in a more general sense, though I wouldn’t tag it as being exceptionally risky, either. So, if you’re comfortable with a moderate amount of risk that looks like calm waters compared to the traditional turbulence of biotech, I think that it’s reasonable to dive in and purchase a few shares.

What to do with your 401K when you change jobs