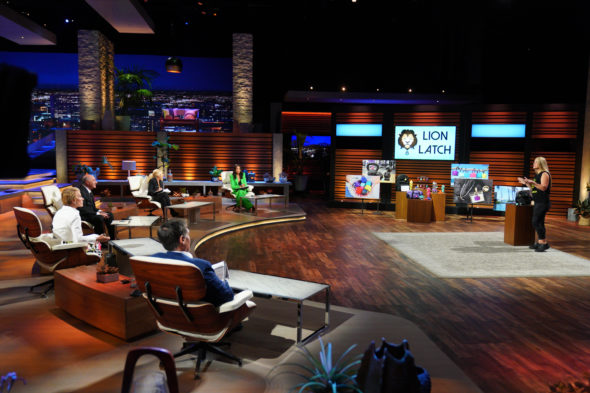 More wheeling and dealing are coming to ABC for the 2022-23 television season. Shark Tank has been renewed for a 14th season on the alphabet networks and will premiere with a “Live” episode.  The current 13th season is expected to air its finale on May 20th.

A business-themed reality series, the Shark Tank TV show follows company owners and inventors as they seek investments from a group of savvy, wealthy investors who are “self-made” tycoons. The regular “sharks” are Robert Herjavec, Kevin O’Leary, Barbara Corcoran, Daymond John, Mark Cuban, and Lori Greiner. The sharks offer everyday people a shot at the American dream and the possibility of striking business deals to grow their companies beyond their wildest dreams. Guest sharks in season 13 include Kevin Hart, Emma Grede, Peter Jones, Nirav Tolia, and Daniel Lubetzky.

Airing on Friday nights, the 13th season of Shark Tank averages a 0.55 rating in the 18-49 demographic and 3.74 million viewers. Compared to season 12, that’s down by 20% in the demo and down by 10% in viewership in the live+same day ratings (including DVR playback through 3:00 AM). It’s a middle-of-the-road performer when compared to ABC’s other unscripted shows. In the live+7 day ratings (which includes delayed viewing), the series averages a 0.70 demo and 4.51 million viewers.

Season 14, here we come 🤩 #SharkTank will be back with bang – a LIVE Season Premiere, so you can watch the deals, steals and cash flow in real time. Who’s ready?! pic.twitter.com/80CWqqXBft

What do you think? Have you been keeping up with the Shark Tank TV series? Are you glad to know that it’s been renewed for a 14th season on ABC?

Check out our ABC status sheet to track the alphabet network’s new series pickups, renewals, and cancellations. You can find lists of cancelled shows here.

Why Ford Stock Stomped on the Gas Friday