Plug Power (PLUG -0.72%) stock popped this week; and although it was up just about 4.7% in the week through 1 p.m. ET Friday according to data provided by S&P Global Market Intelligence, the hydrogen stock could’ve ended the week on a much stronger note if not for Friday’s selling pressure that hit the broader markets as well. Until Thursday’s close, Plug Power shares were up 10.3% in the week.

Plug Power sent shockwaves through the market last week after it reported a big loss for its first quarter and blamed rising natural gas prices. Some analysts even quickly downgraded Plug Power stock’s rating and price targets after earnings.

So when Plug Power bagged a big order this week, investors saw it as an opportunity to scoop some shares after last week’s fall. 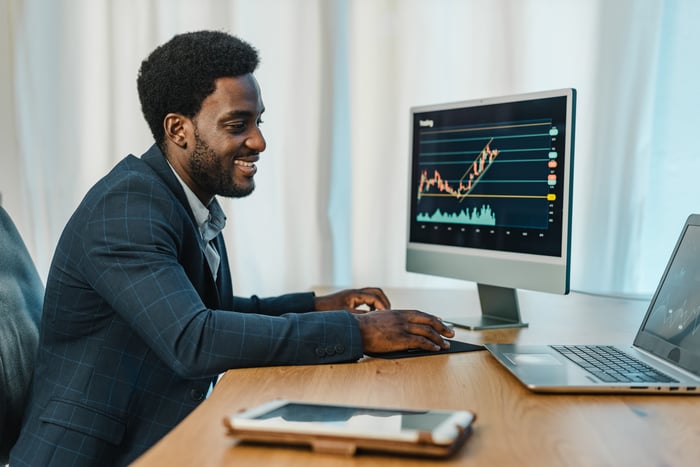 Plug Power won an order to supply a 1 gigawatt (GW) electrolyzer to H2 Energy Europe, a hydrogen fuel-cell solutions and infrastructure company. The electrolyzer, which is a critical device used to produce green hydrogen, will have the capacity to produce 100,000 metric tons of green hydrogen that H2 Energy Europe will supply to heavy-duty commercial vehicles. Plug Power will build such electrolyzers at its gigafactory in Rochester, New York, which is expected to start production by 2025.

The thing is, Plug Power is betting on electrolyzers to cut costs in the future, and this is Plug Power’s largest electrolyzer order so far.

Global interest in green hydrogen — or hydrogen produced from renewable sources of energy — is rising rapidly. For example on May 18, the European Commission put forward a detailed REPowerEU plan that strives to cut the European Union’s dependency on Russia’s fossil fuels and speed up its transition to clean energy. Green hydrogen is an important part of the plan, with the EU targeting domestic production of 10 million tons and imports of a similar amount of green hydrogen by 2030. The commission also set aside additional funding for research on green hydrogen.

Just the previous day, BloombergNEF’s global head of strategy, Kobad Bhavnagri, said at an exhibition that green hydrogen could become cheaper to produce than traditional hydrogen by 2030, driven by electrolyzer costs that could come down by tenfold by then.

Plug Power expects to cut electrolyzer costs by 60% to 70% at its Rochester plant by 2025, and believes this will help steer the company toward its goal of generating an operating margin of 17% on revenue worth $3 billion by 2025. Morgan Stanley analyst Stephen Byrd expects this one electrolyzer deal alone to bring in revenue worth $500 million in 2024 for Plug Power, as reported by TheFly.com. Byrd also has a huge price target of $60 a share on Plug Power stock, or almost four times the stock’s price as of this writing.

Investors are also turning more bullish about Plug Power’s prospects as global interest in green hydrogen rises; and with the stock having fallen so dramatically in recent weeks, they saw an opportunity in the electrolyzer order to buy the growth stock while it’s still almost 70% off 52-week highs.